skip to main | skip to sidebar

back from the plains 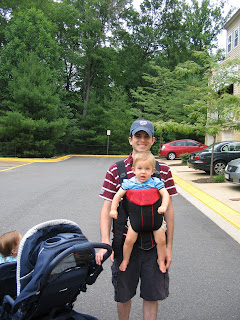 a lovely trip to Oklahoma City for the annual Hearing Loss Association of America Convention. I will blog more about that in a later post.

When I got off the plane the first thing I wanted to do was spend time with the kids & wifey - and that I did.

before I go -- do you, my fellow one or two readers, follow the news? As a federal employee, I was stunned last week when a private security guard working at Walter Reed Army Hospital fired ten rounds at his co-worker after a name-calling episode. What's wrong with that you may wonder? First of all - this guy is hired to protect a federal facility, second - he fired TEN ROUNDS from his gun and MISSED his intended target! Third - these same private guards are employed throughout the united states and abroad to protect civilian workers -- I think it's time for some re-certification screening..and perhaps anger management. 'nuff said.

Oy, I hadn't heard that story. Um, not good. I'm sure they'll teach him anger management in prison.
Forgot to tell you...about 11:30 Saturday night, Laurie got in bed with me. Only to look at pictures, she said ;)
Hope you're having a good week so far...I'm still trying to recover!

Gee, that's not good at all.

Good to see you again dude. So glad you made it home to your lovely family safely.

That's nothing. You should see who the security crew is over at DOT. I'm surprised LaKeisha and LaShawanda could bend over to tie their shoes, much less get their oversized gun belts around their waist.